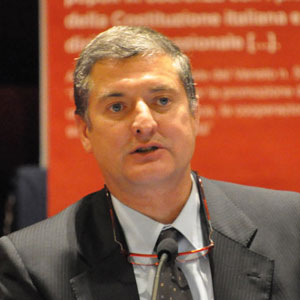 Luigi Foffani (1959) is Full Professor of Criminal Law. He is Vicesecretary-general of the “International Society of Social Defence” (SIDS) and member of the Expert Group on EU Criminal Policy, named by the European Commission (Commission Decision 2012/C 53/05). He is member of the international group “European Criminal Policy Initiative” and one of the authors of the two “Manifesto on European Criminal Policy” (2009 and 2013). He is correspondent for Italy for the Spanish law review “Revista Penal”, member of the editing committe of the “European Criminal Law Review” and of the Italian journal “Giurisprudenza Commerciale” and peer-reviewer of “Rivista italiana di diritto e procedura penale”, “Diritto penale contemporaneo” and “Cassazione penale”. He has taken part in several international research and reform projects, and was member of a group-research on the harmonization of the European economic criminal Law (“Europa-Delikte”) leaded by K. Tiedemann. He was granted a scholarship of the Alexander von Humboldt-Stiftung and obtained many other scholarships from national and international research institutions (Consiglio Nazionale delle Ricerche, NATO, Max-Planck-Gesellschaft, DAAD). Author of more than 100 scientific works (principal subjects: Economic Criminal Law and European and Comparative Criminal Law) published in Italy and abroad, he has coordinated the publication of several international and national conferences and has given lectures in many national and foreign congresses in Italy and other countries (Spain, Germany, France, Portugal, Switzerland, Turkey, Hungary, Poland, Romania, Argentina, Brazil, Peru, Ecuador, China). He has carried out many research stages at the Max-Planck-Institute of Foreign and International Criminal Law and at the Albert-Ludwigs-University of Freiburg i.Br. (Germany) and at the University of Barcelona (Spain). He has also been Visiting Professor at the Universities of Castilla-La Mancha (Spain), Montpellier (France) and Krakau (Poland) and has lectured in many national and international PhD and Master Degree Programs. He became the best qualification (triple 1) by the last Evaluation of the Quality of Research in Italy and the Modena Research Group in Criminal Law was qualified as the n. 1 in the Italian Ranking (see VQR 2004-2010).